This is why bee allergy bracelets and stinging insect allergy bracelets are often worn. They are not just to inform anyone about the wearer's health status, but also to alert people, such as rescuers, first-aid staff and medical professionals of the appropriate action to perform when the wearer is involved in an emergency.

Knowledge Can Save a Life

Preparing for an Insect Allergy Emergency

Always ensure that you or your loved one is wearing a bee and stinging insect allergy bracelet at all times and especially before leaving the house. If necessary, pack an extra bracelet during special trips, particularly if you will be traveling alone or will be leaving town for a long period of time. Always wear the bracelet where it can be spotted easily and avoid taking it off. Great new designs won’t cramp your style and it can mean the difference between living a healthy life and suffering major medical consequences. 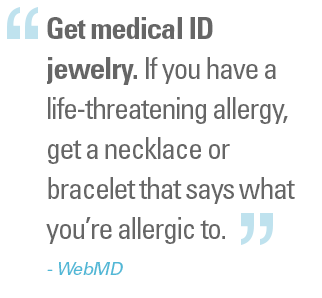